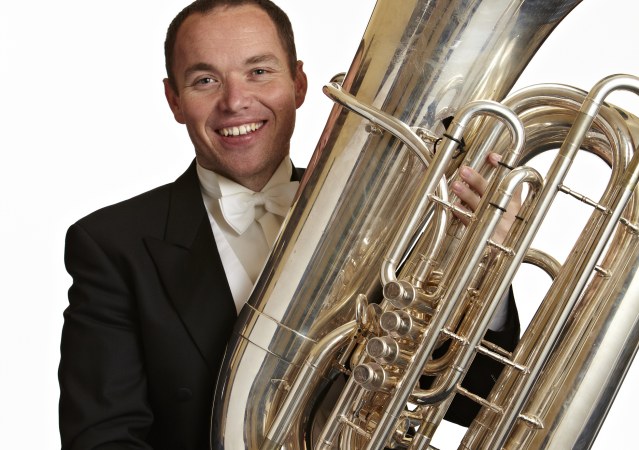 Tim Buzbee „is a fine musician who can make his tuba variously sing like a violin and bark like an angered dog, and touch all those bases in between. His sense of phrasing is as astonishing as his sense of his instrument’s tone coloring“ raved Fanfare Magazine about Tim’s debut solo cd, BUZZED. In 2011, Tim joined the Melbourne Symphony Orchestra as the Principal Tuba. Besides the Melbourne Symphony Tim has held the same position with many orchestras including Iceland Symphony, Malmo Symphony, Galve Symphony, Singapore Symphony, Civic Orchestra of Chicago, and the Acapulco Philharmonic. Tim has won jobs in 8 different countries! Buzbee has been invited to perform as guest tubist with many other orchestras including the Chicago Symphony, Danish Radio Orchestra, Swedish Radio Orchestra, Sydney Symphony, Hong Kong Philharmonic, Western Australia Symphony Orchestra, Dallas Wind Symphony, Malaysia Philharmonic and the Helsingborg Symphony among others.

As a soloist, he has performed concerts and masterclasses around the world including the most prestigious universities and conservatories. Currently, Tim has three solo CDs on the Albany Record label including “Raw Emotions,” consisting of 4 concertos from North America with the Iceland Symphony Orchestra. Buzbee also recorded a cd entitled Eruptions, consisting of standard excerpts for low-brass section for the Albany Record label. He has been soloist with the Melbourne Symphony, Iceland Symphony, Singapore Symphony, Acapulco Symphony, Marshall Symphony, and the „Pershing Own“ Army Band in Washington D.C. Buzbee recently was asked to be a featured artist at the Texas Music Association Conference in San Antonio, Texas. Buzbee was also recently featured on the front cover of the International Tuba Euphonium Association Journal and has been featured in several other magazines in the past. Tim is on the faculty at Australia National Academy of Music and The University of Melbourne.

Buzbee knows he would probably be flipping burgers if not for the help of teachers Ed Jones, Gene Pokorny, and Matt Good. Tim enjoys spending any free time with his wife Jessica, and their five kids, and the two family dogs which think they are children number 6 and 7!!!