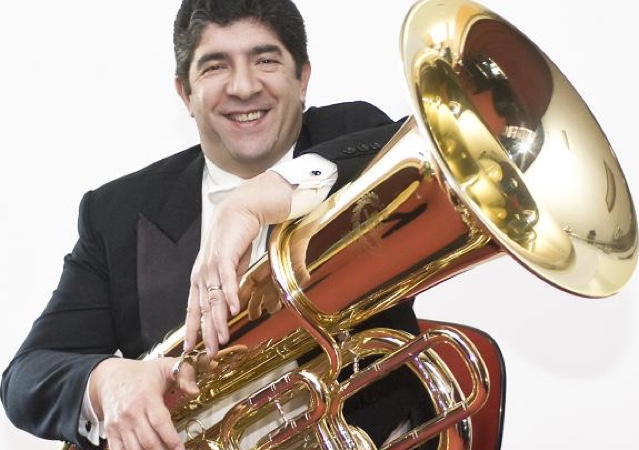 Professor at the ESART and at the Polytechnic Institute of Castelo Branco and the University of Aveiro. Principal Tuba Portuguese Symphonic Orchestra/ Theatre São Carlos Lisbon

Since 1984 has been collaborating with the following orchestras: the RDP Orchestra, the Nova Filarmonia Portuguesa; the Régie Sinfonia (which have since ceased to exist); the Silésia Orchestra; Sinfonia Varsóvia (the two latter are Polish); the National Orchestra of Porto; the Sinfonieta of Lisbon; the Lisbon Metropolitan Orchestra; the Portuguese Symphonic Orchestra; the Gulbenkian Orchestra (where he was the lead Tuba player from 1987 to 2000 and with which he recorded many CDs and made many tours to cities like: Paris, Vienna, Cologne, Munich, Dusseldorf, Newark and Washington D.C.). In the orchestras where he worked, he has always received public praise form conductors, colleagues and soloists like Michael Zilm, R. Fruhbeck de Burgos, Eliahu Inbal, Max Rabinovitsj, Boris Belkin, Max Valdés, Silva Pereira, Pinchas Steinberg, Muhai Tang, Richard Hicoks, José Ramon Encinar, Gérard Buquet, Zoltán Peskó, Fernando Eldoro, Emiliano Pomárico, Johannes Stert, Alejandro Oliva, Vitorino de Almeida, Emanuel Nunes, Donato Renzeti, Julia Jones, etc. He recorded a work composed and conducted by Vitorino de Almeida for Tuba and Piccolo solo, which was edited in CD. In 1992 he performed the Concerto for Tuba and Orchestra by Ralph Vaughan Williams (the first in Portugal) in Lisbon’s Aula Magna. In 1995 he played it again with the Republican National Guard Wind Band. In 1998 he played the Concerto for Tuba and Orchestra by Edward Gregson with the latter Ensemble. In 2008 he also performed the integral work of Hindemith in Culturgest. In 2009 he performed solo again playing the Concerto for Tuba and Orchestra by R. V. Williams. In June 2009, he performed solo Variations in Olden Style by Thomas Stevens with the Portuguese Symphonic Orchestra. In 2010 he played in the Biannual Festival in Munich and in S. Paulo’s Ópera Amazónica, with the Lisbon Modern Ensemble. He was a founding member of Portugal’s Hot Brass Metal Quintet, the Portuguese Metal Dectet and of the Portuguese Association for Percussionists and Wind Instrument Players. With these groups he has been throughout Portugal, since the S. Carlos Theatre to the Caloust Gulbenkian Foundation Auditorium (the big one and the small one), the CCB, many music festivals, the Algarve, Leiria, Capuchos, etc.. In the period of time in which he studied in Paris, he has worked with the University City Orchestra and closely supported the work carried out by the Frankfurt Modern Ensemble and the Intercontemporary Ensemble where he had the privilege of attending many rehearsals by the great conductor Pierre Boulez and Silvain Crambreling. He is a founding member of the Lisbon Brass (previously the Portuguese Brass Quintet). In a 1993 international competition for the Portuguese Symphonic Orchestra he was offered the seat of first soloist, which he declined in order to proceed with his studies in Paris. In a 1999 international competition he was temporarily given the seat of first soloist in the same orchestra. Finally in 2001 he was offered the seat by unanimity, which he still occupies today.