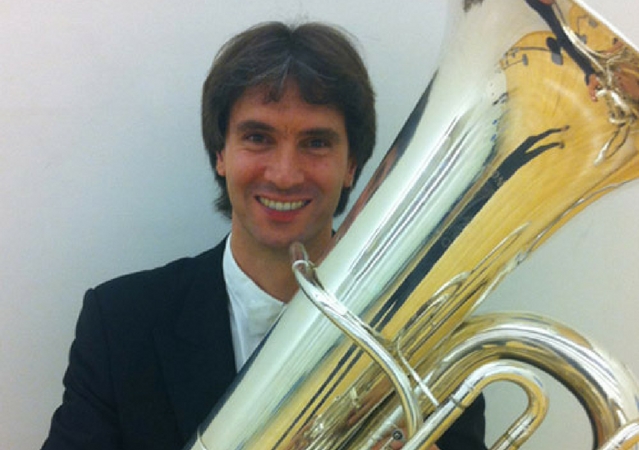 Solo-Tubist beim Orquestra de la Comunitat Valenciana “Palau de les Arts” Ramiro Tejero Morte, spanish tuba player from Ateca(zaragoza), is Principal Tubist of the Valencia Comunity Orchestra “Palaude les Arts”, a position he won in 2008 under Lorin Maazel and Zubin Mehtaas Principal conductors. Formerly, he was Principal Tubist of the Tenerife Symphony Orchestra (2007-2008), MilanoSymphony Orchestra(2005)and NavarraSymphony Orchestra (2004-2007). In 2004 he was finalist at the Royal ConcertgebowOrchestra tuba audition. Besides his orchestral activity he has been Professor of tuba and brass ensemble at the Liceo Conservatory in Barcelona and AragonConservatory in Zaragoza. Ramiro began playing tuba in his townâ€˜s wind bandstudying with Vicente Montoro. He then went to Madrid Conservatory to study with Miguel Moreno where he graduated with Honors having won the tuba award. Afterwards he moved to Germany to study under guidance ofJens Bjorn Larsen at the HannoverHochschule and was also travelling to Chicago to improve his playing with Gene Pokorny, Floyd Cooley and RexMartin. During his musical training, he was member as principaltuba of the Spanish National Youth Orchestra, Schleswig-Holstein festival Orchester, European Union YouthOrchestra and Gustav Mahler Jugendorchester.
www.lesarts.com