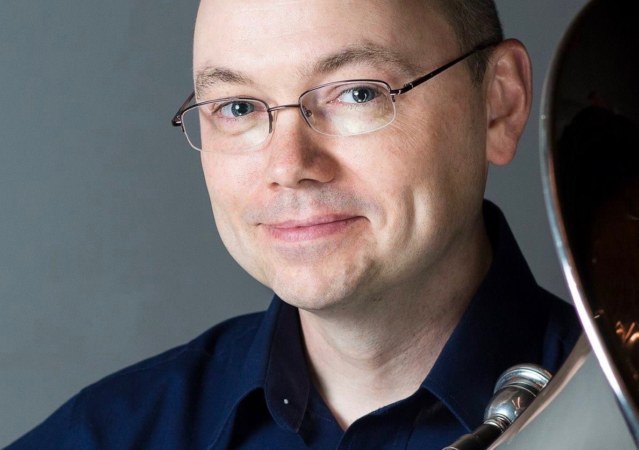 Charles Guy is Professor of Tuba and Euphonium at the Crane School of Music at the State University of New York at Potsdam and is currently Co-chair of the Performance Department. He performs with the Potsdam Brass Quintet, Orchestra of Northern New York, the Northern Symphonic Winds and annually with the Tuba Bach Tuba-Euphonium Quartet at the Tuba Bach Chamber Music Festival in Big Rapids, Michigan. Dedicated to the development of young students, he teaches at the Crane Youth Music Camp and has taught at Interlochen Arts Camp, New England Music Camp and Blue Lake Fine Arts Camp. Before joining the Crane faculty, Charles held a similar position at the Lawrence University Conservatory of Music and performed with the Lawrence Brass, the Oshkosh Symphony and the Green Bay Symphony Orchestra.  As a soloist, he has performed at International and Regional Tuba and Euphonium Association conferences, the Army Band Tuba-Euphonium workshop and many university recitals. In 1999, he won the prestigious Leonard Falcone Festival artist division solo tuba competition and has served the festival as an adjudicator on several occasions. He has presented numerous master classes and clinics for music educators and tuba-euphonium students at the New York State School Music Association, New York State Band Directors Association, Texas Music Educators Association conventions and in public schools. He has commissioned several works for solo tuba and tuba in chamber settings, including the Potsdam Brass Quintet’s most recent collaboration with Anthony Plog on a piece entitled Polychromes in celebration of the group’s 50th anniversary. His orchestral experience includes performances with the Syracuse Symphony, Rochester Philharmonic, Michigan Opera Theatre, and Midland Symphony Orchestras. He has published articles and reviews in the International Tuba and Euphonium Association Journal and has been recorded on the Madstop, Mark and Bernel Labels.  He earned both the Masters of Music and Doctor of Musical Arts degrees from Michigan State University and a Bachelor of Music Performance degree from the University of Akron.  When not teaching or performing, he enjoys time with his wife, Lorie, and two boys, Ethan and Miles. Charles is a Buffet Crampon USA Artist/Clinician and performs exclusively on Melton Meinl Weston.