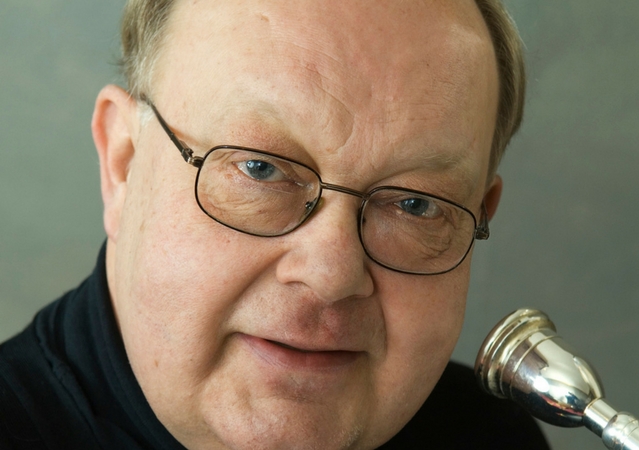 Michael Lind has played in the Royal Stockholm Philharmonic Orchestra since
1977 and was a member of the Philharmonic Brass Ensemble. As a musician
he has performed worldwide with many famous musicians and has recorded
numerous CDs from classical works to jazz. Lind has taught at Indiana
University in the United States and is known worldwide as a teacher and
soloist. Lind promoted and organized the first Tuba-Swedish Workshop in 1977, the
second-Tuba Workshop in 1992, the first Scandinavian Brass Symposium in
1978, the Scandinavian Brass Ensemble and the Scandinavian Tuba Jazz
and Symphonic Band. Many composers have written especially for him but he
has also reviewed some forty works by Nordic composers for wind
instruments. Since 1993 Michael Lind has taught at the Royal Academy of Music in
Stockholm.
Lind has produced a number of historic, state-of-the-art recordings that
defined the highest level of tuba performance at the time of their release. His
first recording, issued on the Four Leaf Clover Records in 1979, as observed
by one reviewer that Michael’s recording of the famous “Carnival of Venice” …
comes off as Mr. Clean — I’ve never heard such impeccable technique
anywhere else — on any brass instrument.” This observation had been
confirmed at the First International Brass Congress held in Montreux,
Switzerland, in 1976, when Lind’s performance of “Carnival” solicited a
spontaneous and enthusiastic rousing standing ovation from the hundreds of
brass authorities from throughout the entire world! Lind single-handedly
validated the performance of music of historical significance in the evolution of
brass solo repertoire. All of a sudden, everyone was proudly programming
Carnival, etc., on their recitals and recordings.
No less an authority than the late great Harvey Phillips wrote the following
about Michael Lind for his first recording, “Play Tuba”:
“In the summer of 1974 Michael Lind came to Bloomington, Indiana for private
study. In 1977 I arranged an American recital tour for Michael. He was a
tremendous success everywhere he went. Not just a musical or artistic
success but a personal success as well’ Through his musical artistry Michael
set new standards of performance. The flood of compositions he continues to
inspire from composers throughout the world is also a part of that legacy.”
One of Lind’s colleagues, the great trombonist Christian Lindberg says of Lind
when he first hear him perform, ” … Michael Lind presented an appearance
that created a true sensation, and the first thought that came to mind was that
this was Paganini reborn with a tuba in his hand. his influence as a teacher
has created a whole new generation of world class brass players in
Scandinavia.”
And from one of our great tuba artists, Robert Tucci, “Lind is a pioneer, a
great performer, a great inspiration to those who composed some of the finest
works in our literature and to his students. His abilities and efforts, both in
regard to the objectives he set for himself and in particular, to the events and
meetings he organized, were amazing.”
What better validation to receive the prestigious ITEA Lifetime Achievement
Award for one of the great tuba artists of all times, Michael Lind, could there
possibly be than references like the above? Lind’s official “curriculum vitae” is
a fifteen-page document of incredible accomplishment and dedication to the
musical art of tuba and brass performance. This short bio merely scratches
the surface of all the incredible accomplishments of Michael Lind and his most
worthy desiqnation.